In this study, we aim to investigate the running mechanism of animals by engineering approach.
In a gravity field, animals must bear ground force that is greater than twice their weight. Moreover, they receive a large impulse at touchdown.
As many biomechanists have indicated, tendons play an important role in running or jumping motion. They store kinetic energy as potential energy during stance and also absorb the impulse at touchdown.

To realize a running robot, introducing such springy characteristics into leg design is quite natural.
Pioneering work was done by Raibert and co-workers. They developed one-legged, biped, and quadruped running robots; all of them had springy legs of telescopic type, and realized various running motions.

Motivated from above studies, we proposed a new alternative leg model for high-speed running.
Our approach was to ``import" biomechanical studies on running animal into mechanical design.
In those studies, we especially focused on the geometric alignment of the muscle-tendon system of ankle joint and its function.
Specifically, we introduced a spring as the bi-articular muscle to drive the ankle joint.

A prototype hardware of one-legged running robot, named Kenken was developed in 1999. 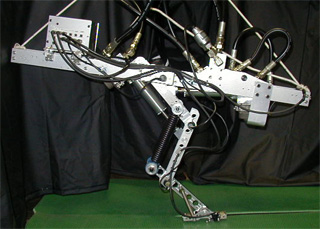 The robot has articulated leg composed of three links, and uses two hydraulic actuators as muscles and linear springs as a tendon.
The mass of the leg is relatively large: 3.6 kg. Individual masses of the thigh, shank, and foot are 2.42 kg, 0.75 kg, and 0.43 kg, respectively.
Using an empirical controller based on the uncontrolled dynamics of our model, the robot has succeeded in running of several steps in a plane.
Successful one-legged hopping experiments showed that our leg mechanism is actually effective for running.
More specifically, the leg spring attached as a bi-articular muscle (gastrocnemius or plantaris) enables the robot to produce sufficient propulsion force by virtue of an energy transfer from the knee, even if there is no actuator at the ankle joint.

2) About the new leg mechanism

Figure shows extensors of an ankle joint, which play the main role in running.
Among them, this study specifically examined arrangement of the bi-articular muscle groups, gastrocnemius and plantaris.
Then, the new leg model shown in Fig. was proposed.
It is an articulated leg model composed of three links.
It has two active joints, the hip and knee, and one passive joint, the ankle; there is no actuator at its foot (this means the toe can rotate on the ground during stance phase, acting as a free pivot).

Since running requires relatively high energy and always accompanies shock against the ground, joint actuation is the most critical problem for hardware realization.
We developed a small and lightweight servo actuator, directly mounted with an industry servovalve.
On-board sensors are, six potentiometers at each joint, and foot switches.
We also installed accelerometers and pressure sensors, which is used only for measurement.
Aluminum box attached to the rear includes, interface circuit, servo amplifier, and signal conditioning circuit, which were hand-made with taking impulse and vibration into accounts.

We developed experimental setup shown in the above figure.
A tether boom constrains the robot to the sagittal plane and measures the horizontal position, vertical position, and pitch angle of the body via three optical encoders.
It also carries hydraulic hoses, signal line, and DC line.
An aluminum box attached to the rear includes an interface circuit, servo amplifier, and signal conditioning circuit, which were hand-made taking the impulses and vibrations into account.
The control program is written in MATLAB/SIMULINK code and runs in a single timer task with a 0.5 ms sampling period.

It is difficult to derive the controller in a systematic way because the robot has the quite complex nonlinear dynamics described below:

Therefore, as the first attempt, the controller was designed empirically based on analysis of the characteristic dynamics of the robot.
A precise simulator was constructed for this purpose.

Matlab-based graphical programming was introduced for flexibility and rapid prototyping of the controller.
Specifically, the mechanical model of the robot and contact model with the ground was constructed using DADS (http://www.lms.be/); also, the hydraulic actuator was modeled as general electro-hydraulic system using SIMULINK.

As a direct extension of Kenken, we developed a new planar biped robot, named KenkenII, to realize not only hopping, but also biped walking and running.

To enlarge the region of attraction, an active tail was introduced into KenkenII in 2004.